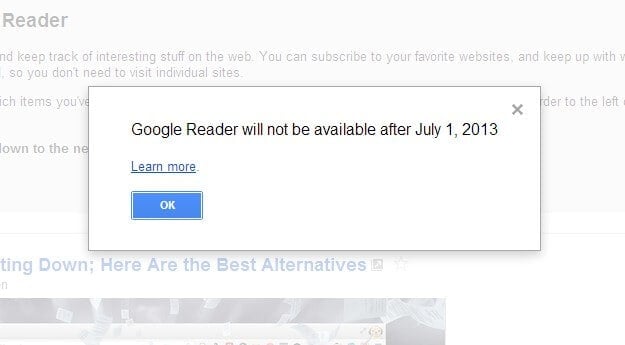 A few weeks ago my heart was broken!

Google announced that they were going to retire Google Reader on July 1, 2013.

What was I going to do?

Google Reader has been the center of my RSS life. I use it to keep track of all the blogs I read, the RSS feeds from Google Alerts, and as my main content curation tool of choice.

When I read that Google was going to retire Reader I immediately begin researching Google Reader alternatives and determined that there were three alternatives that I would research: Newsblur, The Old Reader, and Feedly.

I was going to compare the three products based on three must have features for me:

I first began testing The Old Reader which says this about themselves:

Welcome to The Old Reader, the ultimate social RSS reader. It’s just like the old google reader, only better.

When I logged into The Old Reader I initially liked it’s very clean interface but was quickly disappointed when comparing this tool to my metric:

Unfortunately, The Old Reader failed all three of my metrics and I needed to move on.

The next service I researched was NewsBlur. Upon setting up my account I found the user-interface more feature-rich and I was also able to import my Google Reader feed but in the end was disappointed with the sharing options.

NewsBlur did have a slick import feature and a UI that was intuitive but the lack of sharing using Buffer forced me to move onto Feedly.

After my disappointment with The Old Reader and NewsBlur I decided to check out Feedly. As soon as I logged into Feedly I was impressed. My initial reaction was this is what Google Reader should have been if Google had actually updated Reader over the years.

And the winner is – Feedly!

Feedly handled all of my must haves – the ability to import my Google Reader feeds, a great user-interface, and the ability to share posts using Buffer. I’ve been using it now for a few weeks and I have to admit – I actually like it better than Google Reader. Is it OK to say that?

Although Feedly is my choice your choice could be different depending on what you look for in an RSS reader.
While I highly recommend that you check out Feedly please don’t forget to check out The Old Reader and Newsblur.

Question: What service are you going to use when Google Reader is retired on July 1, 2013?